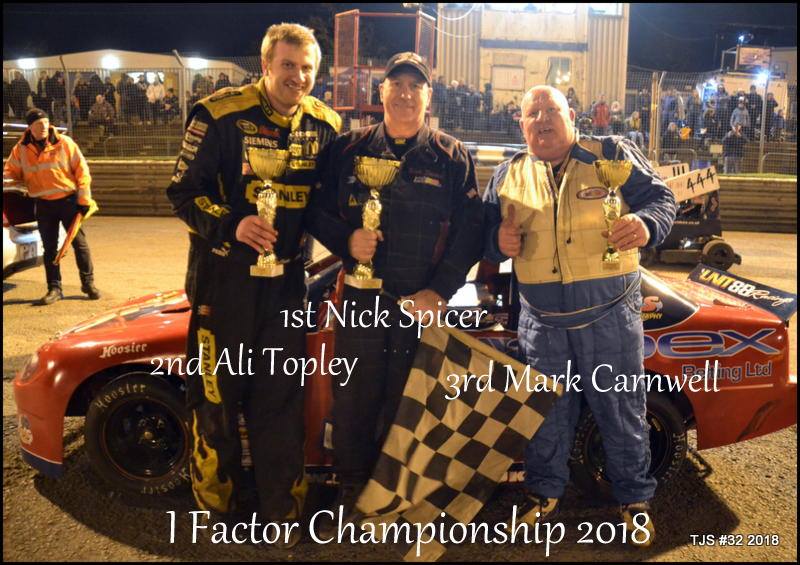 Birmingham Wheels Park played host to the epic conclusion of the 2018 One Stop Services MASCAR Championship. Twelve drivers headed to Birmingham for two final races under floodlights in cool, but dry, conditions. A slight threat of rain caused a few head scratches upon arrival, as is typical of the West Midlands. The weather eventually held out for the drivers to run four slick Hoosier Racing Tires dispite a very light drizzle between race 1 and 2.

The first 20 lap race of the evening was the 7th and final race of the Midlands 400 Championship. Topley (#1) already secured the championship going into this meeting with a 383 point lead, leaving the drivers to fight it out for bragging rights. The drivers made it out to the grid as the sun began to set on Birmingham, lead out by Hinckley (#99) and the 2018 UK Open Champion, Dan Ashton (#14). Ashton on his front row start to take the lead on lap 1, ahead of Harwood (#46) and Tranquille (#12 Hire Car). Meanwhile further down the field, a five-car train came storming though as Allgood (#38), Topley, Carnwell (#93), Nick Spicer (#32) and Juli Stanford (#11), who all started in the second half of the grid, made their way through to the front. The pack reached the battle for 2nd on lap 3, making easy pickings of Harwood and Tranquille who had no response to their pace. Making the most of his 6th place start, Allgood continued to head the charge to catch the leading #14. His progress was eventually stopped as Topley made his way into 2nd on lap at the mid-race mark. Next on his list was Dan Ashton, who had no response for the outgoing champion’s pace. Topley took his 23rd win of the season ahead of Ashton and Allgood.

I-Factor honours were up for grabs in Race 2 of the evening. The grid for this winner-takes-all race was determined by the points accumulated at selected races over the season. Nick Spicer went off row 1 alongside Topley while his , Juli Stanford started on row 2 alongside Michael Spicer. Its been a very close season between Nick Spicer, Topley and Stanford, and this race was no different. The front row made a great start with nothing to separate the pair, they were two abreast for nearly 4 laps. Stanford wasn’t far behind, she made the most of the front two battling to take 2nd from Topley on lap 4. Further back, Michael Spicer lost control of his #17 machine coming off turn 4 on lap 4. The newly crowned semi-pro champion was unable to restart his car, finishing the season on the infield of Birmingham Wheels Park Raceway. The drama wasn’t over as shortly after Stanford’s season ended with a few sparks following a spin in turn 4 and a suspension failure. The #93 of Carnwell may have started in 8th for this race, after missing most of the season, but this didn’t slow him down as he put in an impressive drive to take 3rd on lap 6. Ryan Allgood (4th) put in the fastest lap of the race, but this wasn’t enough for the driver of the #38 to claim another podium finish in 2018. Nick Spicer was extremely fast at front of the field, but Topley was close behind to pick up the pieces if the #32 made a mistake. Spicer the whole race finishing 0.5s ahead of Topley to secure his first I-Factor championship in fine style, took 3rd. It would be one of the closest races of the season that would conclude the 2018 One Stop Services Championship!

The final race of the evening gave the opportunity to our drivers who have not finished in the top 3 all season or guest drivers to take part in one final show in Invitational Trophy. Carl Hamp swapped his mechanic duties with Nick Spicer to take the wheel of the #32, Rebels racer Nicole Emmett was in the #1, #93 was driven by Dominic Butler and the #38 was driven by Ryan Allgood’s dad and mechanic, Neil Allgood. They were joined by regulars Paul Hinkley, Danny Bailey and Olly Turner in the #44 Hire Car. Allgood the way as the green flag dropped ahead of Emmett and Hamp. The safety car came out after 2 laps as Bailey spun in turn 4. Luckily he managed to get the engine restarted and rejoined the race. Allgood the field back into racing conditions., but Emmett wasn’t going to let Allgood walk away with the trophy. The Rebels racer put in a great effort to finish just over 1-second away from the #38. Paul Hinckley was the biggest mover in the race, going from 6th to 3rd! A fine way to end the rookie’s season.

We hope you’ve enjoyed this thrilling 2018 season! It might be over for our drivers, but we’re hard at work finalising the details of a special 10th anniversary 2019 season! Thank you to all of our drivers, officials, promoters and sponsors for an incredible year!