Welcome to 2020 and into the new decade! American Cup Car Racing has grown from strength to strength over the years and we look to the next decade with much anticipation! We’re very excited to see a new title sponsor for the European Championship as we welcome Hallek Electrical Services to the ACCR family. We would also like to give a special mention to all the drivers and sponsors that have supported the series over the years!

We take these first hours of the year to remember the amazing year long battle that Steve Stanford (#22, SAS Who Dares Wins) and Mark Carnwell (#65, SRD International) fought in the 2019 One Stop Site Services ACC European Championship. Coming down to the final heat of the year at Birmingham Wheels Park in November, it was the #22 who took final victory in a nail biting 20 lap race! It was also the year of the rookies, both Lincolnshire Corvette drivers Adam Slater (#24) and Paul Allen (#25) were in contention for Semi-Pro honours with the former getting the better of his teammate.

Roll on 2020 Hallek Electrical Services ACC European Championship! Be sure to look our 2020 dates and news in the coming months! See you at the Motorsport With Attitude show in February! 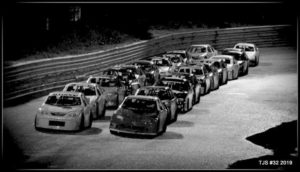