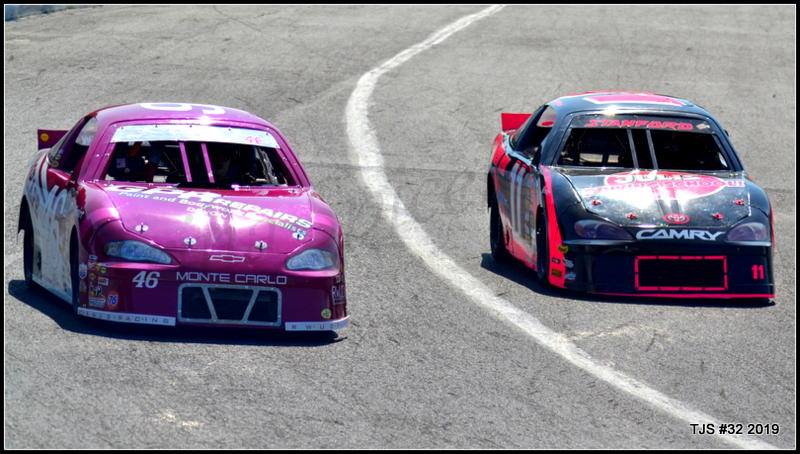 The high-speed banks of the 1/4 mile Warneton Speedway in Belgium played host to the opening weekend of the 2019 One Stop Site Services ACC Racing UK European Championship. Rounds 1 and 2 of the Pirtek International Championship produced action-packed and unpredictable races to bring ACC Racing UK into their 10th anniversary season. Old and new faces, making up a grid of 11 drivers, gathered at the popular Belgian venue under glorious blue skies and a sun-baked racetrack to kick off the 2019 season. Drivers hit the track on Saturday to dust off the cobwebs and bed-in their brand-new Hoosier slicks before doing battle over 6 races on Easter Sunday and Monday.

RWUD Racing’s Chris Harwood (#46) lead the way to the first drop of the green flag in the first 20 lap race on Sunday alongside Paul Sweeney in the #80. The row starters went 4-wide for much of lap-1 as Mark Carnwell (#65, SRD International) and Michael Spicer (#17, SAS Who Dares Wins) made their way to the front from their respective row 2 and 3 grid starts. Carnwell took the lead from Harwood on lap 2, but it was short lived for the SRD International driver as the #22 and #24 cars of Steve Stanford and Adam Slater stormed past round the outside of turn 3. The leading trio broke away briefly but were caught by the two Team All The Ones drivers, Nick Spicer (#1, All The Ones) car and Juli Stanford (#11, All The Ones). Unfortuntely for Nick Spicer, a timing chain issue from Saturday practice would stike again and the newly crowned ACC Racing UK Champion’s first race of the year would end just passed the half-way mark as DNF. He also sat out for the rest of the weekend. Sweeney (#80) brought out the first caution of the year, losing control of his #80 car off turn-2. The #22 Stanford headed the pack for a 5-lap sprint to the chequered flag. Juli Stanford made a very strong restart to jump from 3rd to 2nd. Steve Stanford (#22, SAS Who Dares Wins) could not hold off the speed of the #11, who made an attempt to pass the #22 with just 3 laps to go. The pair would run side-by-side for the remainder of the race but the #11 would take the first win of the 2019 championship. The #24 of ACC Racing UK newcomer Adam Slater topped off the top 3 for a very strong first race in the series.

Hardwood (#46, RWUD Racing) once again had pole position for Heat 2 of the day, he was joined on the front row by Rookies’R’Us driver Paul Hinckley in his #99 car. Carnwell (#65, SRD International) stormed to the front as the pack charged into turn-3. Changes made between heats 1 and 2 turned the #65’s fortunes as he would maintain the lead for the whole race and take his first heat win of the season. He was closely followed by Steve Stanford (#22, SAS Who Dares Wins) who carried his blistering pace from Heat 1 through to Heat 2. Adam Slater (#24, Lincolnshire Corvette) continued his impressive debut with another 3rd place in Heat 2.

The drivers took to the track for the final time of the day. Row 1 of the grid comprised of Michael Spicer (#17, SAS Who Dares Wins) and Hinckley (#99, Rookies’R’Us). The #17 took the lead as the green flag dropped for the final time of the day. Hardwood (#46, RWUD Racing) was quick to capitalise on his row 2 as he jumped to 2nd on the first lap, but it was ACC Racing UK Rookie Adam Slater (#24, Lincolnshire Corvette) who made a rocketship start from row 4 to move up to 3rd as the pack crossed the stripe for the first time. It was tight going through turns 1 and 2 as the #46, #24 and #65 of Carnwell jostled for position. Slater gave no quarters and chased down the leading #17 of Spicer, weary that the fast charging #11 and #22 were making their way through the pack. Spicer couldn’t match the pace of the charging field. It was again Carnwell (#65, SRD International) and Stanford (#22, SAS Who Dares Wins) who put in another blistering performance and came out in front. The #65 crossed the line just ahead of the #22 to take his second win of the weekend to win the first round of the year. They finished ahead of Juli Stanford (#11, All The Ones). Celebrations ensued and the barbeques were lit as the crews tucked their cars away for the night ahead of a second day of racing!

Teams were greeted once again with blue skys for round 2 of Pirtek International Championship. Having lost no speed over-night, Steve Standford made his way though the field in his #22 to take the first win of the day. Michael Spicer (#17, SAS Who Dares Wins) followed suit to his teammate, taking 2nd place ahead of Paul Sweeney (#80).

Round 1 winner Mark Carnwell (#65, SRD International) lead the grid for the drop of the green flag for Heat 2 alongside ACC Racing UK debutant Paul Allen (#25, Lincolnshire Corvette). Carnwell wasted no time in dropping the hammer and built over a 1 second gap as he lead the way on lap 1. Steve Stanford (#22, SAS Who Dares Wins), Juli Stanford (#11, All The Ones) and Slater (#24, Lincolnshire Corvette) made their way through the pack. Unfortuntely for Juli Stanford, a driveshaft issue would put her out of the race. The #22 soon made his way past the leading #65 to take his second win of the weekend.

With limited time between races, the #11 team quickly got to work to get the car back on the grid for Heat 2. Everyone eventually made it to the grid for the final race of the weekend. Hinckley (#99, Rookies’R’Us) and Allen (#25, Lincolnshire Corvette) headed the way as the pack made their way round to the final green flag. It was a closely fought first 1/4 mile of the race, but it was the freshly repaired #11 of Juli Stanford who crossed the stripe in first ahead of Carnwell and Waterfield (#56, RWUD Racing). A fast charging #22 of Steve Stanford soon caught the leaders and set about getting a hattrick. The #22 had no response to the #11’s pace, Juli Stanford would take her first win of the season. Slater (#24, Lincolnshire Corvette) once again in 3rd, a very solid weekend for the ACC Racing UK newcomer.

It was a very successful weekend for Steve Stanford (#22, SAS Who Dares Wins), leaving the first race weekend with a 64pt lead over Juli Stanford (#11, All The Ones) in the One Stop Site Services European Championship and the Pirtek International Championship. Slater (#24, Lincolnshire Corvette) comes out of his first weekend of ACC Racing UK racing joint second with Juli Stanford. Meanwhile in the DW Vehicle Services Teams Championship, SAS Who Dares Wins (#22/#17) lead the way ahead of Lincolnshire Corvette (#24/#25) and RWUD Racing (#46/#56).

ACC Racing UK will next be on track at the Lydden Hill circuit in Kent on the May Bank Holiday (6th May). Our cars will be on display and demo’ing on-track at the BHP Performance Show, be sure to come down to talk to the drivers and see the cars on one of the best circuits in the UK!

Visit the standings page of our website, http://www.accracing.com/drivers-area/#standings, for the full classification of the championship so far!

The third Team to confirm thier 2019 Challenge